Chrysler Corporation has never been great at tracking production figured for their vehicle models. As such, there is very little exact information available on Gen 1 Ram production.

The following production figures were put together by the Turbo Diesel Registry from many sources. One of the main sources is Cummins as the information can be gathered from engine serial numbers. While the following are not 100% accurate, it gives a good idea of the production numbers for diesel equipped trucks.

It was once told by Troy Simonson, the Chrysler engineer responsible for sourcing a diesel engine for the Ram truck line, that the original marketing plan was for 1,000 diesel Rams to be made. As we know by the following photo, the sales demand turned out to be far beyond Dodge’s expectations as on December 12th, 1991, Dodge assembled the 100,000th Cummins Ram. 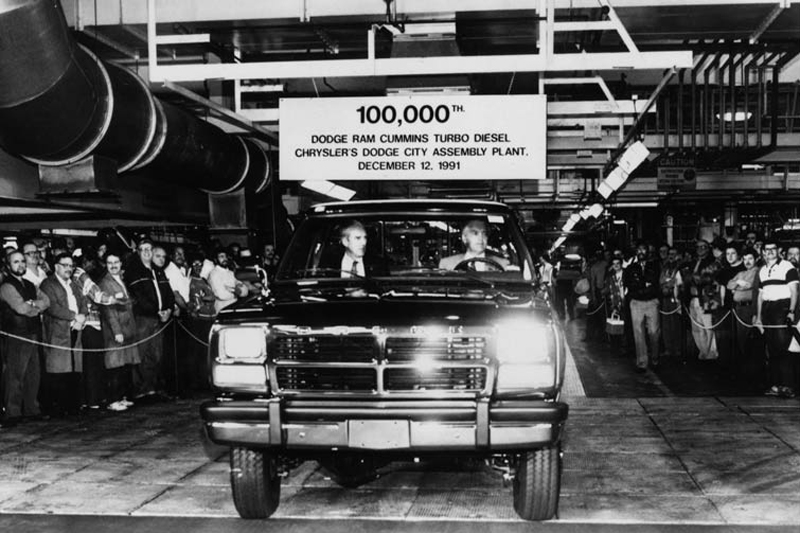 It is often wondered why the non intercooled 1989-1991 trucks were so different from the intercooled trucks. As the business plan called for only 1000 trucks, there was not enough volume to justify special production on so many parts. As such, gas trucks were converted to diesels complete with gas transmissions (Chrysler A727 and Getrag G360), lighter duty gas frames, and very few options were available. By the end of 1990, Dodge made a investment into their now prospering truck line, and refinements were made to the trucks. Dodge also brought back the club cab option, added a overdrive to the A727 in 1991.5, and it also made the exterior trim look a bit more appealing and up to date.

Known production range (there may be others):